There should be absolutely no doubt about the true agenda of Hillary Clinton. As a dyed-in-the-wool globalist, she is the war candidate. In other words, a vote for Clinton is a vote for the beginning of the hot phase of World War III.

was Secretary of State, she incited a full-blown regional war throughout the Middle East as a prelude to the WW3. She and her carefully selected war-making team were chosen by the Neocons to wage the wars known as the purposefully engineered Arab Spring. Their primary target, of course, is ultimately Russia. More specifically, it is Putin’s Russia that is the object of the Neocon’s unrelenting scorn and naked propaganda.

As a matter of historical fact, the American public has never witnessed so much transparent propaganda issuing forth from every major organ of the mainstream media (MSM) and the U.S. Federal Government. These two entities are closely collaborating to start WW3 and Hillary Clinton is their point-person. For only the United States can prosecute an unlawful and unprovoked war of aggression against Russia. And the reason for this is that “might makes right” in the twisted minds of those Neocons who use American Exceptionalism as a malevolent explanation to shamelessly warmonger.

For anyone who doubts this premise, the dystopian, post apocalyptic wasteland known as the Northern Levant stands as a searing testament to the handiwork of former Secretary of State Clinton and her Neocon masters. It was her State Department which fabricated the fake Arab Spring as a means of eventually taking over the entire Middle East.

The very same criminal cabal at State also coordinated with the C.I.A. to create ISIS as a means of using terrorism to further instigate a much broader regional war. The Zionist Neocon faction is quite determined to advance their Greater Israel project and Clinton is their preferred candidate to do the job.

It was also the hardcore Neocon Victoria Nuland who Clinton appointed as Assistant Secretary of State for European and Eurasian Affairs that was directly responsible for starting the Ukraine Civil War in 2014 by orchestrating a coup d’état in Kiev. She and her husband Robert Kagan are well-known as the “First Family of Neoconservatism” so much war follows them around the globe. His brother is Frederick Kagan, whose wife Kimberly is the founder and president of the Institute for the Study of War; while Fred works with the extreme right-wing American Enterprise Institute. 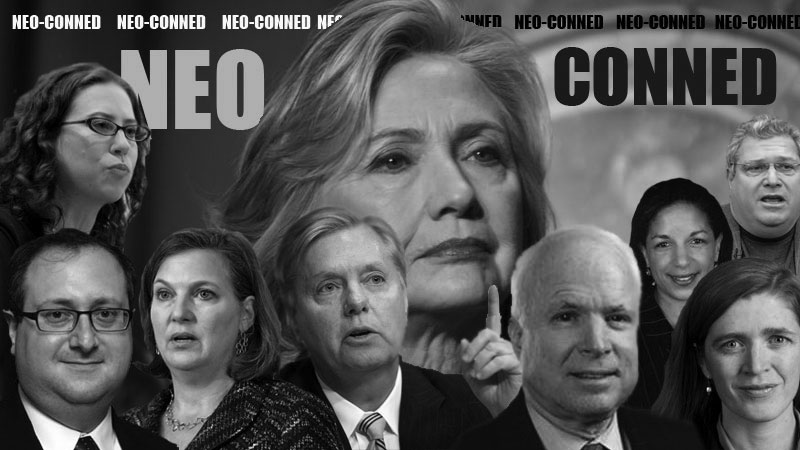 This single reality and political first — made public, that is — is completely without precedent. It also reflects the utmost necessity that the Neocon cabal feels is now required to get Clinton elected. They not only feel the urgency of starting WW3 asap, they also feel the heat of a Trump presidency.

If Trump follows through on his various missions, he will dismantle the war plans against Russia in a day and a night. He will also dispatch all the warmongers to the political desert for as long as he is able to exert such influence.

As for Hillary, she and her many cohorts are heading right to prison where they belong. Read More

What is Going On with Hillary Clinton’s Health? Not only is Hillary Clinton a liar, a fraud, a scam artist, and an all-around mean and nasty individual, there are growing signs that she might be seriously unwell, and as the stress of the campaign grows, those signs are becoming more obvious to everyone.

By now, you’ve probably seen the funny memes about Hillary Clinton’s bizarre facial tick and coughing fits. You may have also wondered about her strange bouts of hysterical laughter.

Usually, when someone is mentally incompetent, it isn’t always visually obvious. Not so with Hillary Clinton. That woman is either the least photogenic person on the planet, or the crazy just keeps on sneaking out.

Is she just really, really weird, or is something more serious at play here?

I do disagree completely with the classification in the video above that Hillary is on the autism spectrum. Autistic people generally have more empathy and are more sensitive than others – many of the issues autistic people face come from a sensitivity overload.

But Hillary isn’t the only one in the Clinton household who is behaving oddly. During her shining moment at the Democratic National Convention, Bill nodded off in the middle of her acceptance speech.

But that’s not all. He’s lost a dramatic amount of weight and appears gaunt. And he was caught on video when speaking in Iowa. His voice was strained and his hands had an undeniable tremor, leading some to believe he might be suffering from the early stages of Parkinson’s Disease.

Given the high-risk lifestyle Bill Clinton has lived, one has to wonder whether his syphilitic chickens may have come home to roost. And did those chickens also roost in Hillary’s hen house?

What happens if the President is mentally impaired?

It seems pretty obvious that the Clintons are both suffering from neurological issues, and possibly other health issues as well.

What happens if a person who is obviously impaired ends up in the White House? Is mild-mannered Tim Kaine really ready to take the reigns? Is HRC likely to offend world leaders by laughing uncontrollably at them? Will her judgement (already incredibly questionable) be impaired to the point that Americans pay a steep price for a decision made when the elevator isn’t running all the way to the top floor?

If an already morally bankrupt person loses her remaining marbles, doesn’t it scare you to think that she will have the ability to write executive orders, declare war, and speak directly to other world leaders who just might have hair-trigger tempers?

Out of all of the many, many reasons that Hillary Clinton is an unsuitable president, her mysterious health issues may be the most worrisome yet.

What do you think is going on with Hillary Clinton’s health?

Check Out The Truth Tale Music On