That the bulk of Americans (especially those 4+ million whose insurance policies have recently been cancelled as a result of the ACA) have to pay more for healthcare as a result of Obamacare, is now largely accepted and well-known. But did you know that the cost of Obamacare is slowly metastasizing to other places? Such as your restaurant bill. 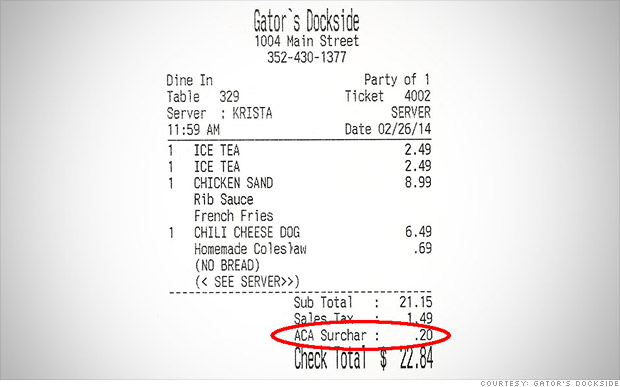 Several restaurants in a Florida chain are asking customers to help foot the bill for Obamacare. Diners at eight Gator’s Dockside casual eateries are finding a 1% Affordable Care Act surcharge on their tabs, which comes to 15 cents on a typical $15 lunch tab. Signs on the door and at tables alert diners to the fee, which is also listed separately on the bill.

The Gator Group’s full-time hourly employees won’t actually receive health insurance until December. But the company said it implemented the surcharge now because of the compliance costs it’s facing ahead of the Affordable Care Act’s employer mandate kicking in in 2015.

“The costs associated with ACA compliance could ultimately close our doors,” the sign reads. “Instead of raising prices on our products to generate the additional revenue needed to cover the costs of ACA compliance, certain Gator’s Dockside locations have implemented a 1% surcharge on all food and beverage purchases only.”

The company employs a total of 500 people, with about half working full-time. Currently only management receives health benefits, but the restaurant will have to offer coverage to all full-timers once the mandate takes effect. The fee will allow the company to continue offering full-time hours to many workers, according to Sandra Clark, the group’s director of operations.

“I’m just trying to keep the employees I have that I’ve worked hard to train,” Clark said.

In addition to the costs of providing health care, the company hired one additional staffer and a consulting firm to make sure it is complying with the law and to assist in the additional tracking of workers’ hours and wages required by Obamacare, said Clark.

Clark is not sure how much the company is spending on compliance, but estimates that it will cost $500,000 a year to extend insurance to its full-time hourly restaurant workers. The surcharge may bring in about $160,000 a year, she hopes.

So more surcharges coming then.

The bottom line decision for businesses: fire your workers, or pass through the costs to other consumers. Many have done the former, or converted full-time workers to part-time status. Increasingly more are opting for the latter. How long until the popular outcry that this latest “freebie” by the government was anything but.